Deniz is elected to be a member of the Technical Committee on Psychological and Physiological Acoustics, Acoustical Society of America. Her term will be 3 years, starting from 2020.

Deniz Başkent, Professor of Auditory Perception attached to the ear, nose and throat department (KNO) of the University Medical Center Groningen /Faculty of Medical Sciences, is one of six nominees for the 2018 Huibregtsen Prize . Jury chair Wim van Saarloos (president of the Royal Netherlands Academy of Arts and Sciences) will announce the winner on 8 October 2018 at the Evening of Science and Society in the Ridderzaal in The Hague.

Deniz Başkent researches the role played by cognitive aspects in speech perception and how brain training can compensate for hearing impairment. She heads multidisciplinary research teams of behavioural and cognitive scientists and researchers with a technical background. She maintains unique collaborations with users of hearing aids and cochlear implants, with the manufacturers of these aids, and with local and international researchers. A notable feature of her work is the close link between her research and its application. The jury described Başkent’s work as being especially relevant for users of cochlear implants, which replace normal acoustic hearing with electrical hearing.

The Huibregtsen Prize, named after Wouter Huibregtsen, was established in 2005 by the board of the Stichting De Avond van Wetenschap & Maatschappij (Evening of Science and Society Foundation). The prize goes to a recent research project that is scientifically innovative and with clear relevance to society. A maximum of six projects are nominated each year, one of which is ultimately awarded the Huibregtsen Prize. The principles guiding the jury’s choice were scientific excellence, a departure from the beaten track, originality and greater societal relevance than might be expected within the discipline. The prize will be awarded at the Evening of Science and Society in the Ridderzaal in The Hague. It consists of a sculpture, ‘The Thinker’ by visual artist Wil van der Laan, a sum of €25,000 that is earmarked for research activities, and a workshop offered by the Lorentz Center in Leiden.

Evening of Science and Society

The Evening of Science and Society was established in 2000 to emphasize the importance of science for society by showing where and how scientific research finds applications in daily life. Leading scientists and prominent figures from other sectors of society will debate topics sparked by scientific research.

Information about Deniz Başkent’s research can be found in the following articles from KennisInZicht, the UMCG’s scientific magazine:

Information about the VICI grant awarded to Deniz Başkent in 2017 by the Netherlands Organisation for Scientific Research (NWO) can be found in the following report: 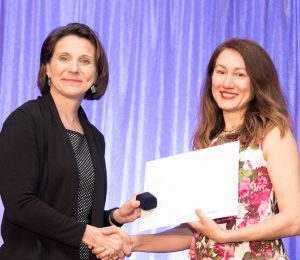 Deniz is elected to a Fellow of the Acoustical Society of America, “For contributions to our understanding of acoustic and electric auditory and speech perception.” Link here. 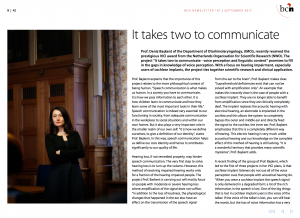 A very nice interview by Elouise Koops covers our new VICI grant in the BCN newsletter.

Terrin Tamati received a VENI Award from NWO. Below is a short summary of this new project. Congratulations!

Our research and Sam van KNO were featured in Unifocus.

Anita’s submission “The role of timing in automatic processing of speech at sub-lexical and lexical levels”to 1st Conference of the Timing Research Forum is accepted as oral presentation. The work is on individual differences in speech processing mechanisms on cochlear-implant users.  The link to the Forum itself here.